Following the military takeover in Burkina Faso, regional analyst Paul Melly considers why West Africa is seeing a new wave of coups after democracy had seemingly become entrenched in the region.

Less than five months after soldiers in fatigues appeared on national television in Guinea to announce that they had removed President Alpha Condé from office, the spectacle was repeated on Monday in Burkina Faso, as the military proclaimed the overthrow of head of state Roch Kaboré.

And that's not forgetting the double-putsch in Mali, where army officers deposed President Ibrahim Boubacar Keïta in August 2020.

They promised the regional bloc Ecowas they would organise elections by next month, but in May 2021 they staged a second takeover to reassert control over the transition and later set out plans to stay in power for almost five more years.

Yet, West Africa was a region where constitutional multi-party civilian politics had become the norm.

Almost all countries were at least formally democratic, even if some elected presidents, once in office, twisted the rules to perpetuate their stay in power.

Now three members of the regional bloc Ecowas (the Economic Community of West African States) are under the command of men in uniform.

Is the long-forgotten era of the military strongman making a comeback?

That's probably too simple a way of looking at things.

Guinea was always a bit of a case apart – with a long history of dismal governance and repression.

Alpha Condé was elected as the first democratic head of state in 2010 but became increasingly autocratic, altering the constitution to allow himself to run for a their term in 2020 and jailing a growing number of opponents.

His downfall last September, at the hands of soldiers promising an inclusive transition to genuine democracy, met with an almost universal welcome among Guineans; there was barely a hint of regret even from his own political party.

How an insurgency led to a coup – again

By contrast, in Burkina Faso, as in Mali, it is the jihadist security crisis that has clearly exerted a destabilising toll.

The relentless reports of Islamist attacks fuelling popular anger on urban streets and resentment among soldiers who feel they are being sent out, too lightly armed, underpaid or even under-fed, to sustain the struggle against militant groups that take no prisoners.

This week's Ouagadougou putsch – like the 2020 coup in Mali, and even the previous 2012 military takeover in that country – is an outburst of exasperation from the lower and middle-ranking soldiers who risk their lives on the frontline in what is a brutally uncompromising conflict.

Feelings had become particularly intense since a 14 November jihadist attack on the Inata gendarmerie garrison in northern Burkina Faso that left 53 of the 120 troops dead.

Demands for a more effective security strategy had built up through last year, and President Kaboré overhauled first his government and then the military command in an effort to regain the political momentum and begin to restore some stability for Burkina Faso's battered northern and eastern provinces.

Over the past two years these have seen more than 1,000 schools close and 1.5 million people flee their homes to escape the violence, some left with no choice but to beg for money or food on the streets of the capital. More than 2,000 people have lost their lives.

Of course, the Sahel crisis is not new. For a decade jihadist groups and inter-communal tensions have threatened the security of everyday village life across ever wider areas of the region, while weak governments struggle to maintain basic administration and public services.

The intervention of French and West African forces in Mali in 2013 did liberate towns from militant Islamist occupation. But it brought no halt to the expansion of the map of rural violence.

And over the past three years the spiral of insecurity has felt as if it is accelerating – particularly in Burkina Faso, where the pattern of indiscriminate attacks on both civilians and security forces outposts has spread rapidly southwards from more remote border areas to impact communities ever closer to Ouagadougou.

The main eastern highway to Fada Ngourma and, beyond that, the border with Niger, is no longer safe. And mines are easily hidden in the dust of the region's rural roads, imperilling everyday journeys to markets or schools.

Last June insurgent massacres in the villages of Solhan and Tadaryat, in Yagha province, left at least 174 people dead.

How Kaboré lost his popularity

Mr Kaboré was elected in November 2015, in the wake of a people-power revolution that had turfed out the previous authoritarian regime. And five years later he was comfortably re-elected to a second term, in a broadly fair and genuinely democratic contest.

But after that he suffered a dramatic slump in popularity as confidence in his ability to get on top of the worsening jihadist violence crumbled.

After rumblings of military discontent over recent weeks, soldiers in key bases in the capital, Ouagadougou, finally mutinied on Sunday, unrest that by late the next day had developed into a full-scale coup.

There are clearly echoes of the 2020 army takeover in Mali. That came after a particularly severe wave of jihadist attacks the previous year and despite some subsequent progress by the government, regional neighbours and France in the campaign against the militants.

But this time around, in Burkina Faso, the timetable has telescoped.

The Inata attack came when the government was still in the midst of redrafting its strategy and the sense of panic has only deepened.

Less than three months later, Mr Kaboré is out of power and in military detention.

It is easy to feel as if the jihadists are deliberately seeking to foment unrest in Sahelian armies.

But in reality, the news of one murderous attack after another, claiming the lives of villagers, local security volunteers or soldiers and gendarmes, fuels a mood of fear and perhaps almost helplessness that can undermine army loyalties anyway.

Now there is speculation about whether Niger, which has been targeted by the same groups as Mali and Burkina Faso, could also face the risk of a military takeover.

There are few certainties in the present condition of the Sahel. But there are some differences from the situation in Burkina.

Niger's President Mohamed Bazoum has launched a major drive to persuade villagers to return to the home areas from which they had fled because of the violence, but supported now with a reinforced military presence, and the restoration of local public services and development programmes.

This is an attempt to prevent jihadist violence from depopulating whole areas and destroying the local social and economic fabric. Will it succeed?

Some commentators suggest that the response to the Sahel crisis "has become securitised" and that development is the true answer.

But across the region, many respond that it is not possible to tackle economic and social challenges without providing security first.

More about the crisis in Burkina Faso and its neighbours: 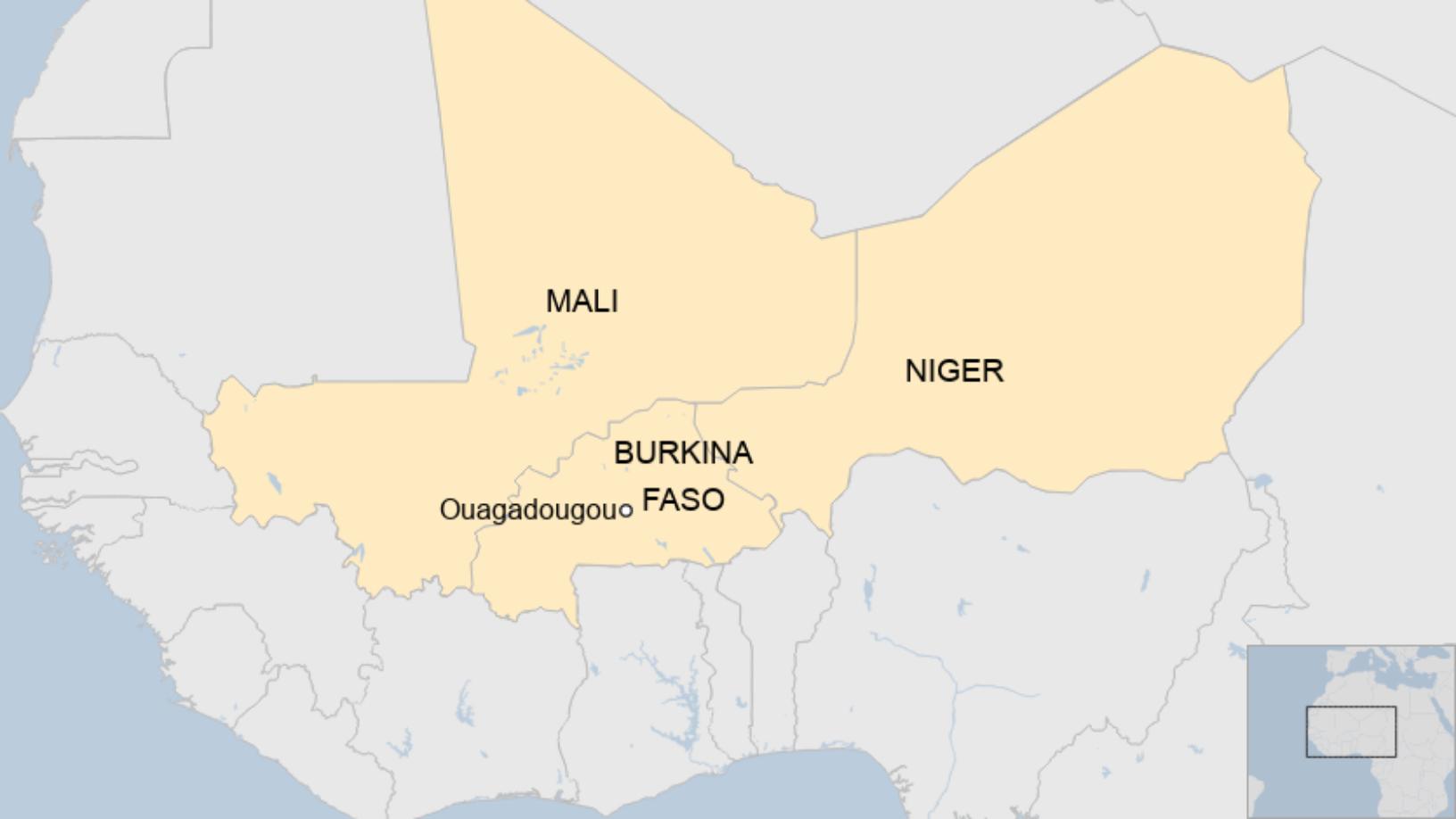