The Department of Basic Education has published updated information on how much money teachers earn in South Africa.

Teacher pay in the country is based on ‘notches’ by post level – with an entry and maximum notch reflecting salary increases for the public service in 2021.

“This is a pensionable basic salary notch excluding the benefits and the additional R1,000 non-pensionable across-the-board allowance which was part of the salary agreement,” the department said.

Most new entrants to the system possess a four-year qualification or enter at the minimum of REQV14, the department said.

This figure steadily increases with age and experience, with school principals earning in excess of R1 million at the high end. 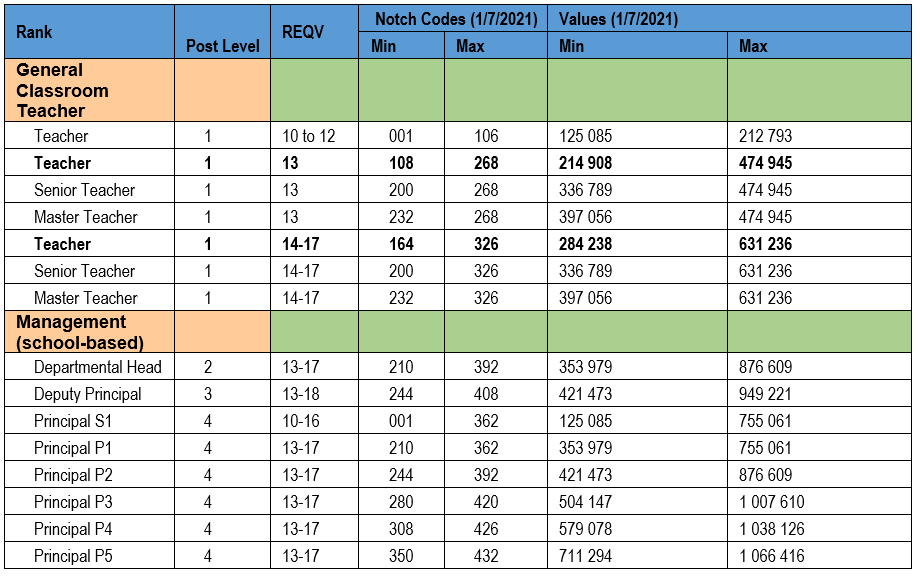 The department added that the current system is designed so that teachers earn progressively more as they advance through the system.

“The Occupation Specific Dispensation (OSD) reform introduced a salary structure with long and overlapping scales where an educator, subject to achieving satisfactory performance, can pay progress annually effectively for the rest of their career,” it said.

“This reform addressed the weakness of the previous salary structure which provided for short progression scales and thus led to educators reaching a salary ceiling at the prime of their career unless they secured promotion. As a result this negatively affected the rate of retention of educators in the system.”

The Department of Basic Education also provided the average salary of educators considering the monthly, annual and Cost-To-Employer (including benefits) values.

The table below shows the average monthly basic salary by age category.

“As expected, when considering all educators the percentage difference between the 30 and below and the 65 and above is high at 37% as the older educators are more likely to be in school management posts,” the department said.

“When considering the PL1 category only, the effect of age is much lower at 18% between the youngest and the oldest groups.”

The largest difference when considering the percentage between age categories is the difference between 31-39 and 40-49.

“Age does affect earnings but to a lesser extent than promotion to higher posts. Generally, age, as linked to pay progression in terms of the OSD, should lead to higher earnings even without promotion.

The Department also commented on the attrition rate of teachers in South Africa – noting that the number of new teaching graduates is increasing every year.

The table below shows the growth from 2016 to 2020. The 25,000 mark was reached in 2017. The current enrolment trends point to the upward trajectory in graduation numbers, the department said.

The output of graduates is favoured towards the Senior/Further Education and Training Phases (SP/FET).

This is partly because the two qualification pathways allow for SP/FET to qualify through both the Bachelor of Education (BEd) and Post Graduate Certificate in Education (PGCE) while Foundation Phase (FP) is largely limited to BEd pathway, the department said.

The average teacher attrition rate over the five years to 2020 was 15,200. The effect of Covid-19 was also directly observable in 2020 and 2021, with an increase in the number of deceased educators, the department said.

However, it said that the country’s schools are able to replace these educators.

“Considering the current output of education graduates there is adequate supply, at least, in terms of quantity to fulfil the need. As indicated above, the supply is still favoured towards SP/FET graduates. Any indication that more educators leave the system than joiners may mainly be the function of provisioning or availability of posts than the shortage of supply.”

Furthermore, one of the proxy indicators of the shortage of educators is the extent to which schools appoint unqualified educators, the department said.

The teacher supply in terms of quantity is reasonably adequately at least from the analysis of the situation in public education, the department said.

“The Department is continuing with the implementation of the Funza Lushaka Bursary Scheme to address not only historically scarce subject areas but also new emerging areas in technical and vocational subjects as part of the introduction of the three-stream model.

“In addition, the recently published critical skills list includes an allowance for recruitment of foreign educators with STEM subject qualifications at secondary schools. This will ensure that the sector is able to augment the local supply while developing capacity to address the emerging demand.”

Eskom confirms Stage 2 loadshedding will be implemented throughout the week