After months of warnings, the Nelson Mandela Bay municipality says it reached its ‘day zero’ on Monday (13 June) as the metropole is no longer able to extract water from the surrounding Impofu Dam.

The municipality published a document which indicated that the dam had hit Day Zero and would no longer be able to supply residents with water. It added that several suburbs would face water cuts.

“Residents are cautioned that the bulk water supply is vulnerable since no water can be extracted from the Impofu Dam because it is too low. Only Churchill provides water, which is insufficient and is currently being supplemented by over-abstraction from Loerie Dam.

“This is merely a temporary solution, and water will have to be reduced again as of Monday. As a result, we urge residents to use water sparingly.” 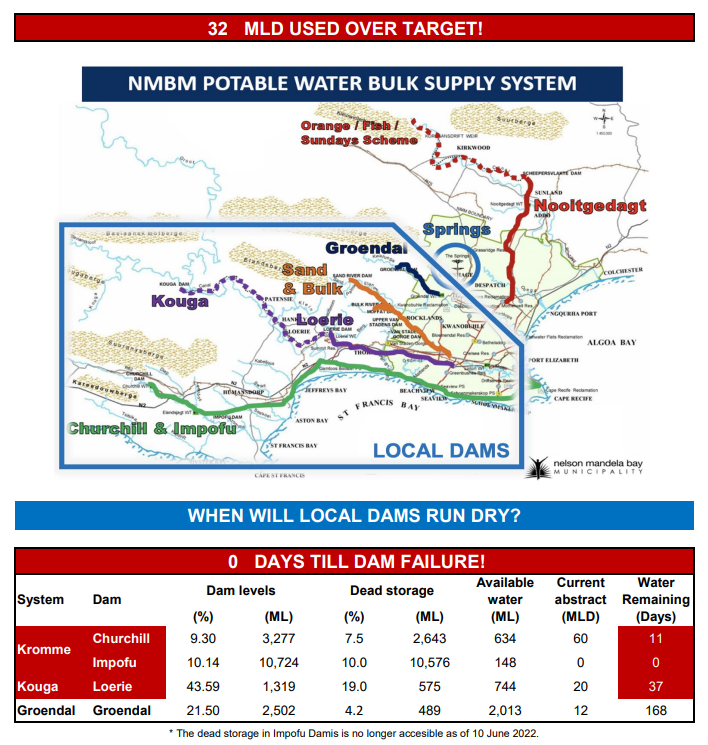 The neighbouring Kouga municipality said it would be forced to introduce ‘water shedding’ from Monday after the level of the Churchill Dam plunged to below 10% this week. The municipality said the towns of Jeffreys Bay, Humansdorp and the Greater St Francis Area would face water cut from today.

Households and businesses in these areas rely almost entirely on the Churchill Dam for water.

Kouga mayor Horatio Hendricks said that if no rain falls in the catchment area of the dam, the region could be left with no water in the taps within the next three weeks.

“We have been trying to delay the need for water-shedding, but the situation is critical, and we cannot avoid it any longer.

“We know that it will be a difficult adjustment for the affected communities, but we ask that they bear with us. This measure is necessary to help keep water in the taps for as long as is possible.”

He said the water to the towns would be switched off for the greater part of the day (from 10h00 to 16h00), seven days a week, starting on Monday.

Read: A look at South Africa’s new mega bridge – under construction in the Eastern Cape

Free State protest: Teenager died after he fell from bakkie

[PHOTOS] Ramping it up: Limpopo brothers shine on international catwalks