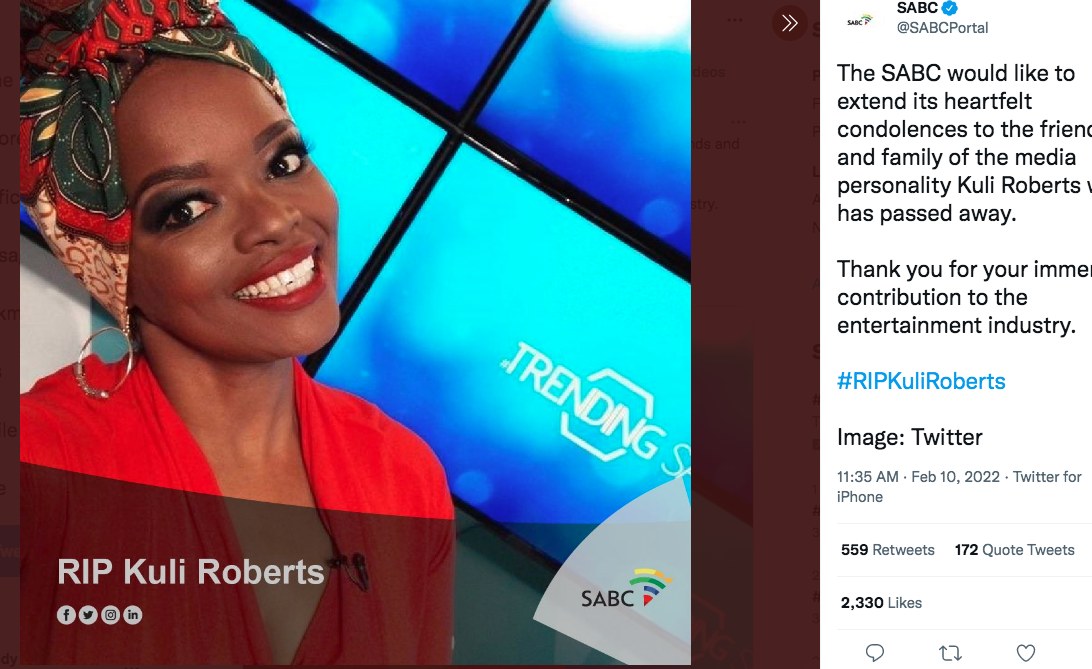 Cape Town — The entertainment industry is mourning the passing of media personality and actress Kuli Roberts, who died on February 9, 2022, at the age of 49.

Roberts won the hearts of many South Africans in a career spanning several decades.

Her impressive career saw her work as a journalist, as well as being an editor at local magazines Fair Lady, Drum and You. She was also an editor at Sunday World newspaper. Roberts also worked as a co-host on several South African television shows, including The Real Goboza, What Not To Wear, and TrendingSA. Roberts had a no-holds-barred approach to exposing injustices in the entertainment industry. She was also known for her activism for people living with albinism.

The cause of Roberts's death is still unknown. Her family has issued a statement following her death.

She leaves behind two children and a grandchild.

Tributes for Roberts have poured in on social media:

@SABCPortal – The SABC would like to extend its heartfelt condolences to the friends and family of the media personality Kuli Roberts who has passed away. Thank you for your immense contribution to the entertainment industry.

@ThomasGumede – So saddened by the death Kuli Roberts. She was such a joy on screen and in real life! #RIPKuliRoberts Condolences to her family, friends and all of us fans!

@Cellular_Jnr – Let's be grateful that we lived in a time where you could experience Kuli Roberts on your TV screen and newspaper… There will NEVER be anyone like her. NEVER. She is the benchmark and the standard of South African entertainment news.

@danielmarven – RIP to one of the beautiful soul ever meet. #RIPKuliRoberts