President Cyril Ramaphosa in a televised speech said that the floods caused “billions of rands” of damage in KwaZulu-Natal, the second-largest contributor to South Africa’s economy, and Eastern Cape provinces. The government will focus on providing humanitarian aid, re-homing displaced people and reconstruction work, he said.

Weather stations, particularly in KwaZulu-Natal province, last week reported the heaviest rainfall in at least six decades. The deluge triggered floods and landslides that washed away roads, bridges, houses and interrupted operations at the nation’s biggest port, which ships grains, cars, coal and other products.

“The significance of the Port of Durban and related infrastructure for the effective operation of the country’s economy means that this disaster has implications far beyond the province of KwaZulu-Natal,” Ramaphosa said in his speech.

Given the impact of the floods on South Africa, the cabinet decided to declare a national state of disaster “to ensure an effective response across all spheres of government,” he said.

The Solidarity Fund, which was initially set up to mobilize money to help South Africa fight the Covid-19 pandemic, will help manage the fund and finance reconstruction efforts, Ramaphosa said.

The floods dealt another blow to the economy of KwaZulu-Natal less than a year after a week of deadly rioting and looting left hundreds of people dead and shuttered thousands of businesses. The region was also hit hard by strict coronavirus lockdown measures that brought all but essential economy activity to a standstill.

The havoc wreaked by the floods affected more than 13,000 households, destroyed R5.6 billion of road infrastructure, about 4,000 houses, and more than 550 schools in KwaZulu-Natal, according to Sihle Zikalala, the province’s premier. 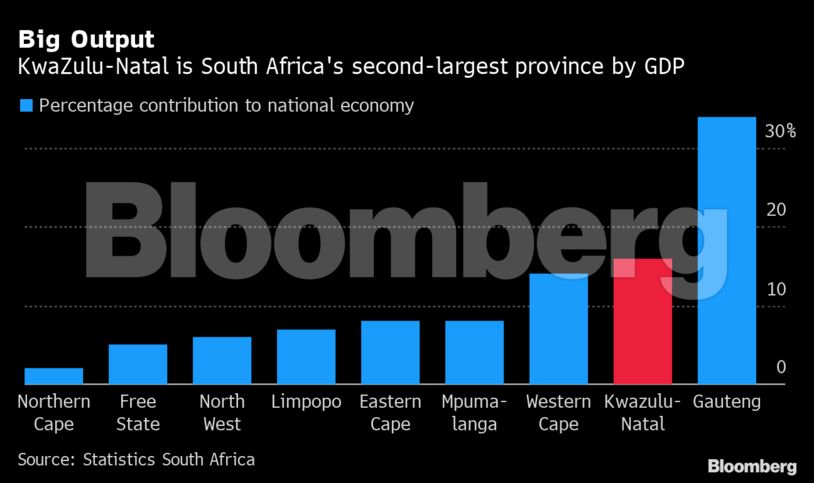 Lamola: It’s been a challenging year for the justice department