A leading Nigerian artist tells writer Molara Woods why his new installation at London's St Paul's Cathedral is important, as the world-famous building re-evaluates its memorials to historical figures including the admiral who led the campaign that resulted in the looting of the Kingdom of Benin.

Spotlights pick out the rhinestones in Victor Ehikhamenor's giant rosary-bead tapestry so that it sparkles, brightening up part of the crypt in the 17th Century cathedral.

This image of the oba, or king, of Benin dominates the space, through which thousands of visitors pass every week, and draws the eye.

Next to it – barely readable and tarnished through time – is a much smaller brass memorial plaque in honour of Admiral Sir Harry Holdsworth Rawson, who led a punitive expedition in 1897 to the West African kingdom of Benin.

He oversaw the British soldiers and sailors who destroyed a centuries-old civilisation, looting and burning down the oba's palace in what is now Benin City in the Nigerian state of Edo.

Their looted treasures – thousands of metal sculptures and ivory carvings made between the 15th and 19th Centuries and collectively known as the Benin Bronzes – are now at the centre of a debate about the return of artefacts taken during the colonial era.

But as his plaque recalls, Rawson was revered at the time for his exploits right across the British Empire.

Through memorials to hundreds of historical British figures, St Paul's presents a version of the past. But in an ongoing art project the cathedral authorities are attempting to bring new perspectives.

"There is something very powerful about seeing an oba standing there next to the panel memorialising the Benin campaign," the cathedral's chancellor, Dr Paula Gooder, told the BBC.

The work is also a reminder of "the enduring legacies and losses of colonial war", the exhibit's co-curator Prof Dan Hicks said.

St Paul's has decided not to get rid of any of its monuments, recognising that "people had different values" in the past, and instead wants to "engage in a conversation with history," Dr Gooder explained. 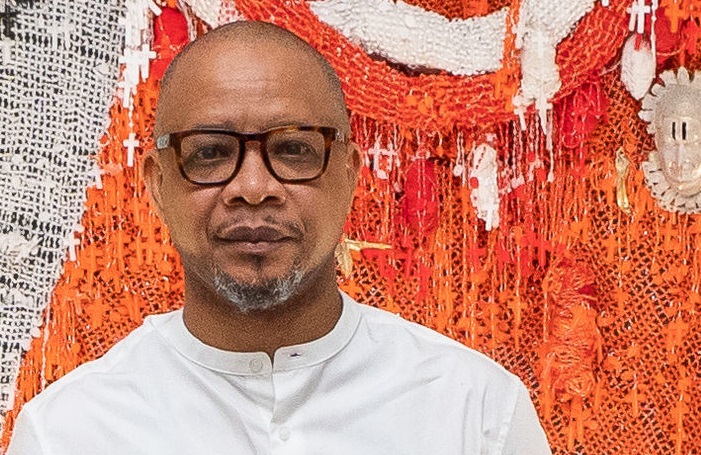 To the British people [Rawson] was a hero, to the family he was a hero, but it could also be that to some other people he was a war criminal"Victor Ehikhamenor
Artist

Ehikhamenor is in no doubt as to his role in that conversation.

"To the British people [Rawson] was a hero, to the family he was a hero, but it could also be that to some other people he was a war criminal," the artist said.

He feels that in the whole debate about reparations and the push for the looted artefacts to be returned home to Nigeria, Rawson's "painful" role in the whole affair has been forgotten.

"Sometimes we have to remind people that [atrocities] happened."

Ehikhamenor is from the same Edo culture and artistic tradition as the bronzes, and his piece is inspired by Oba Ovonramwen, the Benin monarch who was exiled by the British in 1897.

The installation depicts a larger-than-life figure of the oba standing in full regalia, and with the instruments of his power.

"This is me reawakening Oba Ovonramwen and every other person that was violated during that oppressive attack on the Benin Kingdom," said the artist.

The work was created late last year in Ehikhamenor's studio in Lagos, Nigeria, and involved three months of continuous work by the artist and a team of four assistants.

"I call them The Kingmakers," Ehikhamenor said of the team.

They were young women who played mainly Yoruba gospel music while they worked on the piece, stitching all the elements together, as the image of the oba gradually materialised on the monumental cloth-work.

"There's no way people are going to see it and not feel the joy and feel something that they cannot understand," said the artist.

To create the work, 5,000 rosary beads, traditionally used to aid Catholic devotion, were stitched onto lace, along with rhinestones and bronze statuettes.

Prominent among the miniatures hanging on the work is a replica of the 16th Century mask of Queen Idia, the most famous of the Benin Bronzes.

The mask is coated in chalk, another strong feature of the entire work, harking back to the artist's childhood memory of his grandfather's invocations with ritual chalk at the sighting of the new moon.

'History is a moving train'

He started using the rosary in his studio practice in 2017, to raise questions around what is a religious item and what is art, what is held sacred and what is stigmatised as demonic.

"Our art has been demonised for so long. So, now, my thing is: if you see a work that is made from the rosary, are you going to say it's demonic?

"The Edo artist has always dwelled on duality; this world, the other one; past and present."

Ehikhamenor is one of the leading voices in the clamour for the repatriation of looted art, but he shies away from the activist label, insisting that: "When you're asking for your father's patrimony, you're not an activist; you're just asking for what belongs to you."

Still Standing was created in this vein.

On display in a building this is at the heart of the British establishment, it is not a lecture, nor is it forcing any particular stance on people.

But the radiance of the piece commands attention, challenging the viewer to take another look at a historical episode, and consider the continuing impact of the destruction of the ancient Benin Kingdom.

For Ehikhamenor, the past should always be up for review.

Molara Wood is a writer and journalist based in Lagos, where she works as chief editor at Ouida Books.

More on the the Benin Bronzes:

Battle for the Bronzes: