The US will lift restrictions on southern African countries on 31 December now that officials better understand the threat of the omicron variant of Covid-19, the White House said Friday.

With omicron widespread in the US and worldwide, travellers from those nations won’t have a significant impact on the American case count, according to a senior Biden administration official who spoke on condition of anonymity.

South Africa’s rand led gains in emerging-market currencies after the White House announcement, which initially came via a press officer’s tweet. The rand rose as much as 0.9% to 15.5147 on the dollar strongest level since 18 November.

The government imposed restrictions on people travelling from South Africa and seven other nearby nations on 29 November because of the discovery of the omicron variant.

The US Centers for Disease Control and Prevention notified airlines they must provide the names of passengers who had travelled in southern Africa in recent days so local health agencies could conduct contact tracing.

The restrictions didn’t stop omicron from entering the US and becoming the dominant strain of infection. The CDS said Monday that omicron now accounts for more than 70% of new US Covid cases.

President Joe Biden told reporters on Tuesday he was considering lifting the restrictions after his health advisers had suggested he reconsider. 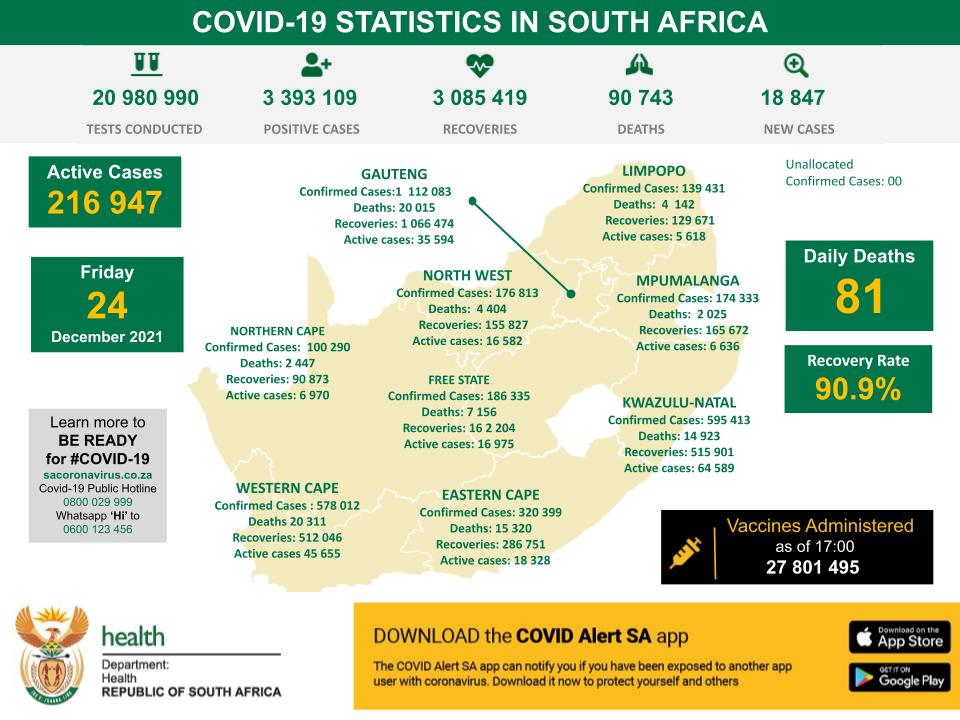 South Africa will stop coronavirus contact tracing and won’t ask those who’ve been directly exposed to infected people to quarantine, indicating a shift away from tough restrictions to contain the pandemic.

Authorities in Africa’s most-industrialized nation will only try and track the spread of the disease in a cluster outbreak, the nation’s director-general of health said in a circular dated Thursday. As much as 80% of the population have some sort of immunity from prior illness or vaccines, the department said.

“Containment strategies are no longer appropriate — mitigation is the only viable strategy,” Sifiso Buthelezi said in the missive. “Quarantine has been costly to essential services and society as many people stay away from their work and thus lose their income.”

While South Africa’s contact tracing has been negligible compared with many countries outside the continent, the move still represents a change in approach even as the highly transmissible omicron variant continues to rage. The government declared a state of disaster when the coronavirus arrived in March 2020, and has followed an alert level-based system of curbs depending on the prevalence of infections ever since.

The rationale provided for the strategy change “is that the quarantine process does not have a major effect in terms of chains of transmission and is difficult to implement and sustain,” Adrian Puren, acting executive director of the National Institute for Communicable Diseases, said in an e-mailed response to questions.

The shift may also be influenced by South Africa’s push to recover from its deepest economic contraction in at least a quarter-century last year. Economists surveyed by Bloomberg predict gross domestic product will expand 4.9% in 2021, compared with a previous estimate of 5.1%, partly due to travel bans that followed omicron’s emergence.

The nation’s official jobless rate is at a record of almost 35%, with a lack of major sports and entertainment events restricting even informal work.

Omicron was identified by scientists in South Africa and Botswana last month, and the region has been the front runner in the latest phase of the global pandemic. Yet there are positive indications that the variant does not lead to the same extent of severe illness and death as previous incarnations, and the South African government has held off toughening containment measures as a result.